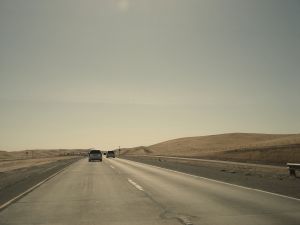 I had another brilliant plan to become a better person without putting much effort into it. In this case, it even takes no effort at all. I switched my car radio to a French speaking radio station. I figured this way I will hear French every day, and I will be fluent in it before I know it! Ha! Or, as the French would say: Tiens!

The only effort I did make, was flip through all the French stations until I found one that plays music I actually like. I figured if the music keeps annoying me, this little plan would not outlast the first traffic jam or tailgater.

Even, or dare I say especially, the commercials are turning out to be a very effective crash course. Commercials usually try to sell everyday objects, and they tend to repeat their product several times, which can be quite annoying in your own language, but is turning out to be very useful when you’re trying to remember a word.

An extra advantage, so I have noticed, is that, since the lyrics of the music are mostly in English, my brain has to switch a lot between French and English. This is brilliant, because I have found this to be un peu troubling in ze past.

Of course, this plan only works with a language you already know a little. If I would manage to find, say, a Japanese radio station, I would not understand one iota of what is being said, and so I would learn bupkis.

2 thoughts on “Learning French while being lazy”