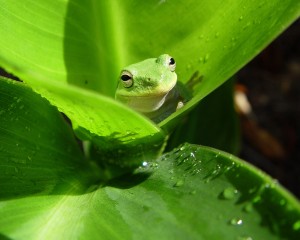 The most famous haiku ever reads:
an old pond
a frog jumps in —
sound of water
(by Basho, picture: sxc)

Recently I’ve rediscovered haiku writing. Not only do I love the genre, I think it’s a great way of practicing your pen, and your mind.

Haikus are short poems, without rhyme. They consist of a maximum of seventeen syllables, over three verses: 5-7-5. And despite the shortness of a haiku, it should contain a juxtaposition of two observations or ideas. The volta usually happens between the second and the third line of the poem.

Haikus tend to find their inspiration in nature. When they deal with other subjects, like people, they are called senryu. But in order to keep it simple, I’m using the term haiku for the whole bunch.

Here are some of the benefits I see to writing haikus:

1. The shortness of the poem obliges me to cut all unnecessary words. Sometimes I’m surprised about what I can throw out easily, without weakening my point. On the contrary, the image usually becomes stronger when expressed in fewer words.

2. I have to evoke a whole thought or image, or even two, in very little words. This makes me look at this image in a different way. I need to dissect it until I find the core of what I want to say. There’s just no room to elaborate.

3. Every word is of capital importance. So I’d better think each and every one of them through. An excellent habit for any kind of writing.

4. Writing an excellent haiku takes longer than it would seem considering its length. Still, it takes less time and effort then writing a novel does. It’s nice to feel the thrill of finishing something I’m happy about on a more regular basis than once every two years or so.

The principles behind the writing of haiku poems can easily be transposed to other kinds of writing. I’ve noticed since I’ve been writing haikus (again), it has become more easy for me to “kill my darlings”. Especially adjectives and adverbs often make a sentence weaker, I find.

Here are some of my haikus. Well, a translation of them (which did not prove to be easy). I would love to find other haiku lovers. So please feel free to share yours, or your thoughts about them, in the comments.

2 thoughts on “A great writing exercise (even for prose writers): haiku”